Here we have a blog by our newest conservation assistant Rachel. She’s previously worked at Scotney Castle and has been covering a role here at Standen since July. It’s hard to believe she’s only been here since then as she’s a great part of the team!

With only 3 months left as a Conservation Assistant at Standen, it’s pretty shameful that I haven’t contributed to the blog but my excuse is that it’s been a busy 6 months.

To prove this, I thought I’d explain one of the tasks that I have done to assist the House Team in order to protect Standen’s collection. I’ve chosen one that I’d never done before this week because I enjoyed it and think it’s pretty interesting: freezing objects to destroy insect pests.

A few weeks ago, Kay, Standen’s Facilities Assistant, and I were asked to inspect and clean the display cabinet in the Butler’s Pantry and its contents. The cabinet is rarely opened so you might think it would be unnecessary to clean inside. However, although the doors are kept shut, they are not air tight so a bit of dust had got in but more significantly so had a certain kind of pest – carpet beetle and their larvae, woolly bears.

Woolly bears sound cute but they’re actually the larvae stage of carpet beetles and eat keratin found in natural fibres so are a real threat to our collection, especially textiles, at Standen. The larvae shed old skins as they grow and it is usually these, along with the damage they cause, that indicate an infestation.

Have a look at them here…

During our survey of the cabinet, Kay and I found enough woolly bear cases (plus one fully grown carpet beetle) to require action beyond a thorough vacuum.

Carpet beetles cannot survive below a certain temperature so an effective method of killing both the larvae and adult beetle is to freeze the items on which they have been found. The length of time it is recommended to freeze objects depends on the temperature of the freezer: 3 days at -30, or 14 days at -18 then 48 hours to defrost followed by another 14 days exposure. We use the latter method at Standen due to the temperature of our freezer.

This week, Fiona and I prepared the objects for freezing treatment. Carpet beetles target textiles in particular and although we had not found evidence of the pests on all of the textile items in the cabinet, we decided to freeze them all to be on the safe side.

To freeze the items we removed them from the display and wrapped them in acid free tissue followed by polythene.  It was important at this stage to remove as much air as possible from the packages before sealing them with tape to prevent any water ingress which could lead to dye leakage. For awkwardly shaped items a hoover can be used to suck the air out; we used this method for the chauffeur’s hat.

The hat in the cupboard

All wrapped up and having the air sucked out!

Vacuum packed and ready to be frozen (NT/Rachel Finch)

Once the items were all sealed in polythene with their identifying details and the date clearly marked on the outside, we took them to the chest freezer in the Stable Yard to be frozen.

We placed the smaller items in hanging trays and raised the rest above the bottom of the freezer to allow air circulation. 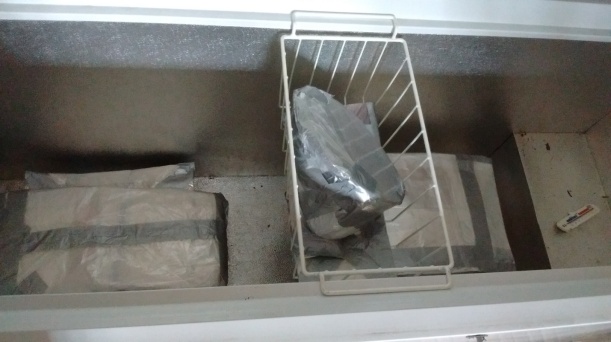 Everything packed and ready to be frozen (NT/Rachel Finch)

At the end of 2 weeks we will carefully remove the items and allow them to defrost for 48 hours before refreezing them for a further 2 weeks.  After this we will un-wrap them and hopefully find nothing, meaning they were pest free when they were placed in the freezer, or some dead woolly bears/carpet beetles.

In the mean time we will remove the remaining items from the display case and spray it with a water-based insecticide to kill off any insect pests left inside.