Sitting underneath the mother of pearl cabinet in the Hall Alcove, is this two handled Red Luster vase by William De Morgan.

Luster ware pottery has a metallic glaze that makes it look different colors based on what light you view it through. De Morgan rediscovered this technique around 1873—74, after many years of experimentation.

This vase is covered in fish, which was a common theme in De Morgan’s work. He took inspiration form the East,    particularly that of Hispanic and Italian origin, as well as further afield.

De Morgan did not only produce vases, he also produced tiles, other ceramics and stained glass windows. All of which were sold through Morris & Co. 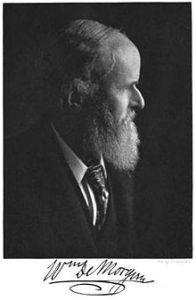 De Morgan originally met William Morris when he attended the royal academy of arts. He had quickly become disillusioned by the ideas there and turned to Morris and the Pre-Raphaelite circle.

He set up his first ceramic studio in 1872, in Chelsea but was not very   successful at the start. His early work contained a lots of firing defects and irregularities. By the time he moved to Fulham, his work had become what you see today but he was beset by financial difficulties. Despite regular cash injections by his wife, Evelyn De Morgan an artist in her own right, De     Morgan could not afford to keep the pottery going so it was sold. De  Morgan eventually found success as a writer.