With the weather finally starting to look like spring has arrived and Easter just around the corner, this month I thought I’d choose an object featuring a traditional symbol of new life. 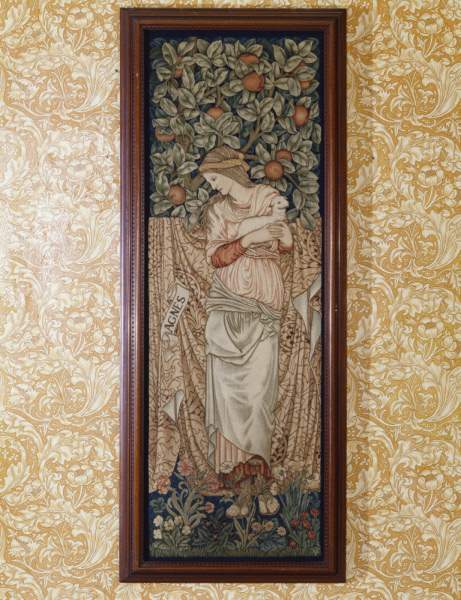 This is the tapestry of St Agnes at the top of the stairs. She is often depicted holding a lamb to represent her purity as a virgin saint, and in fact her name comes from the Greek ‘hagnē,’ meaning chaste. Agnes is also very similar to ‘agnus,’ the Latin word for lamb. She was martyred in Rome in AD304 for her Christian beliefs and is the patron saint of engaged couples, gardeners and girls. Every year on her feast day, 21 January, two lambs are blessed at her church in Rome.

Stained glass window from the Church of St Helen, Welton

This particular design was adapted from one of a pair of stained glass window by Edward Burne-Jones which can be seen at the Church of St Helen in Welton, Yorkshire, along with a version featuring St Cecelia. William Morris added the foliage to the design and the tapestry was produced by Morris & Co., highlighting the collaboration between the two men. Both were involved in the founding of the company that bears Morris’ name, even though nowadays Burne-Jones is better known as one of the leading Pre-Raphaelite artists. 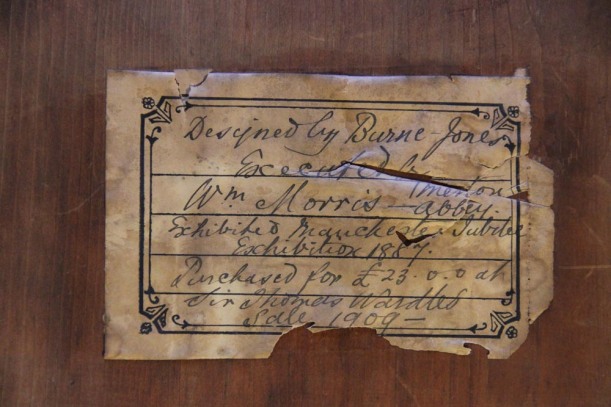 Label on the back of the tapestry frame

The tapestry was originally made for Sir Thomas Wardle, a fabric printer from Staffordshire who produced many early Morris textiles. There is a label on the back that tells us that it was exhibited at the Manchester Jubilee exhibition in 1887. Another label from the Stockport Centenary Exhibition in 1892 wrongly labels it as an image of St Cecelia, so it must have originally been one of a pair. 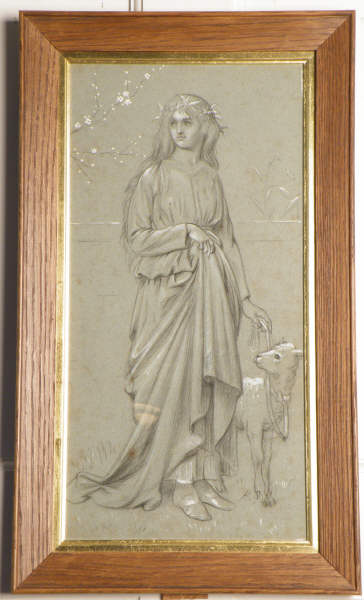 The tapestry of St Agnes is not the only object in the house to feature a lamb, you can also see one in Henry Stacy Marks’ chalk drawing representing spring from ‘The Seasons’ in the Billiard Room. 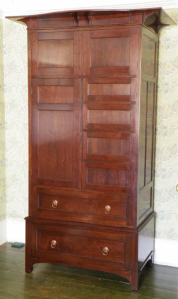 This linen press in the North Spare Dressing Room was designed by C.F.A Voysey, a renowned architect and furniture designer during the Arts and Crafts period.

A linen press is similar to what we know as a linen or laundry cupboard. They were built to hold sheets, napkins, clothing and other textiles.

One of the common features used to identify Voysey’s work is a simplistic design with clean horizontal and vertical lines. He strongly believe in letting the high quality materials speak for themselves and preferred using unfinished and unpolished materials, especially wood.

“Simplicity, sincerity, repose, directness and frankness are moral qualities as essential to good architecture as to good men”. (C.F.A Voysey) 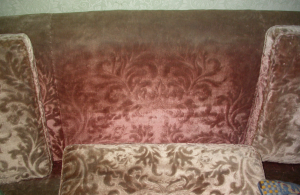 Light is one of the most damaging factors in conservation. Light damage is quite easy to spot as causes quite dramatic fading or bleaching but for other objects it can be even more damaging. For textiles like cushions and wall hangings light causes fibers to break down and eventually tear. For organic materials, like paper and animal based glues, they become brittle whilst vanishes and oils harden and flake.

The UV Film ready to go

Ideally UV levels should be at zero but it is impossible to prevent UV from reaching collections as it is present in both natural light and light bulbs. Fortunately the light bulbs here in the house do not emit too much UV but the windows and doors present another problem.

In order to prevent as much damage as we can, we follow a strict light plan by limiting the number of hours the blinds and shutters are open. we also use UV filters on all of the windows and doors.

UV filters are made up of a polyester film that absorbs and reflect UV. However it is not perfect and does let in some UV. UV film lasts between 10 – 12 years during which point air bubbles and cracks start to appear. We have recently had our filters replaced which was very interesting to watch. 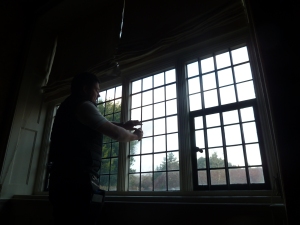 The UV Film being applied to the Half Landing Windows

Firstly the old film had to be removed which is rather simple – it is literally pulled off the windows and then any residue left on the glass is scraped off with a razor blade. The glass is then washed. The new film is then stuck on using water as its adhesive. it sounds very simple but the new film has to be tested before being applied to ensure it is up to the job and then it has to be cut to fit the pane of glass exactly. You can imagine in certain places here, like the windows on the Half landing, taking a long time! 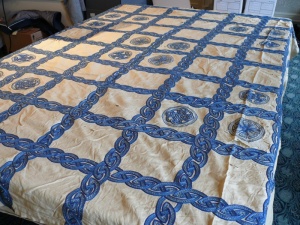 The bedspread prior to conservation work

Last year, money raised through our property raffle, visitor donations, and collections by staff (some of whom raised money by running the Brighton 10k race!) enabled us to send an important piece of Standen history for vital conservation work.

A family bedspread was donated to Standen by the late Phyllis Wager, who, as one of James and Margaret Beale’s grandchildren, had often come to stay at Standen when it was the family’s much cherished home. 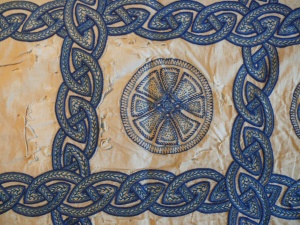 Detail of the bedspread, with damaged areas prior to conservation work

The bedspread had been made by Amy Beale – Phyllis’s mother, and the eldest of James and Margaret’s children – but had been so well-used and loved that it required some expert TLC.

Thanks to the efforts of visitors, volunteers and staff, this specialist conservation work has been carried out and the bedspread will be returning to Standen on 19 May, where it will be displayed in the Larkspur bedroom.

Thank you to everyone that donated the money, time and energy which has made this delicate work possible. We look forward to welcoming the bedspread back, and hope you will be able to visit and see the bedspread returned home.